My journey upstream to determine the source of River Babies began in my home town of Rochester, New York.

Like most children, I had a sense of regional pride: being from Upstate New York was the privilege possessed by few.

Rochester, like every American city, was an exceptional city with a storied past. It began when Colonel Nathaniel Rochester purchased a 100-acre lot and began to sell the land in small lots in 1811. With the completion of the Erie Canal in 1825, which connected Albany to Buffalo, Rochester became one of America’s first boom towns, garnering the moniker the “Young Lion of the West.” Rochester was incorporated as a city in 1834 after experienced a population explosion that more than quadrupled its population to 12,252 between 1820 – 1834.

After the completion of the canal, flour mills began to pop up along the Upper Falls of the Genesee River. By 1838, Rochester was the world’s leading flour producer, earning it a new moniker: “Flour City.” Later in the century, the Genesee powered a manufacturing boom. Rochester became the birth place and home of manufacturing giants Eastman Kodak, Bausch & Lomb, and Xerox.

Rochester had deep religious roots. During the 1830s boom-time, Rochester experienced one of the nation’s biggest Protestant-revival movements, which was led by Charles Finney. Taverns and theaters were closed, and  churches were opened and filled with people. Rochester’s revival was one of the sparks that inspired the revivals of the Second Great Awakening.

Rochester was also known for being a city that opposed slavery. It served as Frederick Douglass’ home between 1847 and 1872. It was from the basement of the Memorial AME Zion Church in Rochester that he published his influential abolitionist newspaper: North Star. Rochester also played an important role in the Underground Railroad. Kelsey’s Landing along the Genesee River served as the last stop for an estimated 150 escaping slaves annually, before they boarded ships to Canada.

Rochester was also home to the legendary suffragist, Susan B. Anthony, from 1866 to 1906. Her home became Rochester’s first National Historic Landmark. Rochester’s fascinating history is an understandable source of pride.

My family relocated to Rochester in 1965. We happened to move there right after Midtown Plaza was constructed in 1962 as the first indoor urban mall in the United States. I had fond memories of shopping at the Plaza. It was famous for its Clock of Nations. As a child, I was mesmerized by the clock opening every half-hour with the beautiful music and the dancing marionettes. The Plaza also had an indoor monorail for children that I begged to ride each time we came. 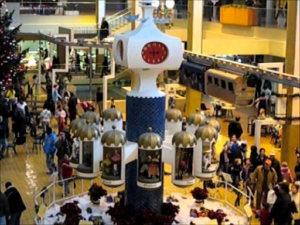 Unbeknownst to us, by the time we had arrived in Rochester, it had already begun its gradual process of decline. There had been a race riot in Rochester the year before we moved that received national attention, but that is a story for another day.

My childhood in Rochester was filled with many happy memories. I attended a public elementary school: Rochester’s #38 Elementary School. #38 school, was a primarily white elementary school, but I did have a few black classmates each year. I don’t ever remember doing homework, but I do remember having recess every day — several times each day!

We had our own version of tag we would play at recess called, “Pom-Pom-Pullaway.” We would run across a field from one line to another. You couldn’t run to the other line until the person who was “it” called out “Pom-Pom-Pullaway.” The official school version was touch-tag: we preferred tackle.

Fortunately for us, we had very little adult supervision outside, so most days it was tackle. As a rule of thumb, the dirtier I came home, the more fun I had at school. Let’s just say my mom had plenty of laundry to do. My mom would ask me how I got the grass stains on my good pants and dress shirt. I would just shrug my shoulders, then run outside to play. I may have only been eight, but I realized that any confession would result in the end of tackle “Pom-Pom-Pullaway.”

In the winter, it was “King of the Hill.” The snow plows would make huge mounds of snow at the edges of the parking lot. The snow would become ice rather quickly – just the way we liked it. Ice made King of the Hill more challenging, more dangerous, and much more fun. It would have been humorous watching 3rd graders tumbling down the snow mound in their snowsuits and mittens on. I would come home bruised and scratched on many winter days at #38 school. Every bump and bruise a badge of honor.

In the background of my childhood fun, there were major forces at work in our city — to which I was oblivious.  Yet, these forces created particular experiences that have been percolating in my subconscious for decades. They fostered a curiosity in me that, over time, developed into a calling.

In 1971, the Rochester School District began forced busing for high school students. That September there were massive racial fights in two of the local high schools: Charlotte and Franklin High Schools. Confrontations between gangs of white and black students went on for weeks. The police made 34 arrests that fall and were investigating 354 reports of assault, most of which came from the newly created Charlotte Junior High. I was zoned for Charlotte.

According to an article in the Democrat and Chronicle dated Sept. 15, 2013, “The most violent of the incidents occurred on June 19, 1972, when twenty-five students and two teachers were beaten during a rampage by youth at Charlotte Junior High which caused about $9,000 in property damage.  Thirty students were charge [sic] in the incident and suspended.”

As I approached middle-school age, my folks began to talk about moving. Ironically, my dirty and damaged clothes, along with my unexplained bumps and bruises created a sense of urgency in their decision-making process. Apparently, my parents thought I was getting beat up at school every day, but were afraid to talk about it. Regardless, the Newman family was preparing to be part of a massive urban exodus, known as “White Flight.” In the light of our city’s racial turmoil, such a move to keep their son safe made sense for our family.

In 1973, we moved to the very white suburb of Greece, New York. Coming from a city school to a suburban school, I was placed in the lowest classes for reading and math. The suburban schools were thought to be superior to the city schools. There were three sections of 6th graders: not one black student among us.

In High School, we had over 330 students in my senior class: only 1 black student. Let’s call him Jerome. Jerome actually lived in a neighborhood right next to ours. All the homes in his neighborhood were brand new, large two-story brick homes. Jerome played neighborhood football with us. He never got in trouble in school. He was a decent student. All my classmates liked him. That’s why it surprised me to hear the following story from a person who was a Rochester clergyman at the time.

Apparently, members of a church adjacent to Jerome’s neighborhood, along with some of Jerome’s neighbors, approached a respected clergyman to ask him how the neighborhood could force Jerome’s family to move out. I wasn’t told this story until recently, so as a teenager I had no idea this had happened.

That little meeting turns out to be one vignette of a darker, lesser known history of Rochester. Turns out this story was evidence of some of Rochester’s “upstream” issues. But I digress.

Yes, like all American cities, Rochester had an exceptional past, but it also has some truly ugly stories that have remained carefully untold. Stories that those neighbors and my own dad had never heard. The racial conflicts which spawned “white flight” were symptoms of deeper problems. As a Rochester citizen, Frederick Douglass, once said, “The thing that is worse than the rebellion is the thing that caused the rebellion.”

Rochester’s Race Riot of 1964 and the racial conflicts at Charlotte High and Charlotte Junior High School didn’t occur in a vacuum. There were antecedents. To understand those antecedents, we must move beyond what we think we know. We must ask, why? What caused this? We must push on upstream if we are ever to find out why there are so many babies in the river.

For more on Rochester: https://www.youtube.com/watch?v=rWl6eAFo7uA

Parable of the River Babies

From the Orange Groves to High Falls