Article appeared in The Acadiana Lifestyles newspaper, Saturday, April 14, 2018. Article reported by Claire Salinas. In the Azalea Park neighborhood of Lafayette, the New Hope Community Development of Acadiana works with children to offer just what its name says – new hope. 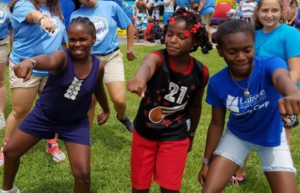 New Hope offers free after-school tutoring three days a week, along with the opportunity to get involved in a STEM Club, faith-based scouting program, one-week Bible Camp for elementary students and a six-week enrichment program over the summer.  In the Azalea Park neighborhood, which it serves, 40 percent of the families live ant 50 percent below the poverty line, which is deemed as extreme poverty by the U.S. Government. The idea to start a program like New Hope was sparked in John Newman, New Hope director, as early as high school, but it wasn’t until May 2012 that he officially launched the nonprofit, alongside his wife, Kris Newman. He worked with underserved kids during his Bible College program and as a volunteer with the Bridge Program, a faith-based tutoring program in Lafayette, giving him the experience and push he needed to eventually launch New Hope. “When I volunteered for the program, I wanted to work with the older kids, but I was needed with the kindergarten students, who couldn’t read, add or sit still, and after a few weeks I wanted to quit.” said Newman. Before deciding to quit his volunteer position, something happened that gave Newman the inspiration he needed to continue volunteering. “By that April, as I was walking up to the parking lot, one of the kids in my group saw me and ran towards me to give me a hug and say, ‘Mr. John, I love you’” said Newman.  “It was at that moment that I began to understand the power of love.” 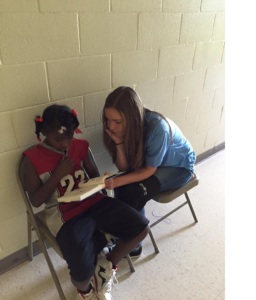 During tutoring sessions, New Hope students read 20 minutes one-on-one with an Admiring Adult, who treats the time as both learning and relations time. Young readers are encouraged to discuss the story, choices characters make and what might happen next in the story.

The love he experienced that day as, along with his training, as a pastor fueled Newman to adopt a different view of success for the kids in his program. “For us, a good day is when the kids go home feeling loved,” said Newman.  “We all have a basic human need for dignity and respect, which we feel is grounded in God loving us, so we want our kids to know they are worthy of being loved and have tremendous potential.” Since launching their program, Newman and his team have found that focusing on reading produces significant results for the students in their program so while the tutoring program covers a variety of subjects, reading remains a primary focus. “By kindergarten, the average child growing up in poverty is two years behind his academic peers, and from there the gaps only get bigger, according to state test results,” said Newman.  “Studies also show that if a child isn’t at grade level reading by third grade, they are much more likely to drop out of school.” In addition to academic skills, Newman and his staff also emphasize soft skills, which they feel are imperative for helping kids retain their academic gains.

Each year New Hope partners with the city’s six week summer camp by providing story time, which is combined with crafts. Three years ago, youngsters learned about the Tuskegee Airmen and made their own “airplanes” out of cardboard boxes.

One skill that is strongly emphasized to students is grit, or the art of not giving up. “We have discovered that kids growing up in low-income neighborhoods find it too easy to quit,” said Newman.  “We don’t let our kids quit though; so if they start a book or a puzzle, they finish it.” The call Newman feels to serve underprivileged kids is what motivates him to continue growing and expanding the program. “To love and take care of the poor is a Biblical command I had neglected for years,” said Newman.  “In Matthew 25:31-39, Jesus says to take care of the needy is to visit Jesus. The Bible seems to be pretty clear that if you want to know God, you need to get to know your poor neighbor first.” As the program grows, so do its needs.  Newman and his staff are currently in search of a new part-time staff member to help accommodate the growth. New Hope teaches children grit at Azalea Park _ newhopelafayette.org