Parable of the River Babies 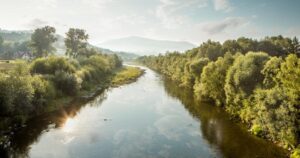 Kris and I felt led to start New Hope nearly 12 years ago. Early on in our ministry, one of my mentors shared the “River Babies” parable with me. His ministry was similar to ours, providing an after-school tutoring program for under-resourced children living on the northside of town. I would like to share the wisdom of that parable with you today and how its meaning has changed for me over the years.

“Once upon a time, there was a small village on the edge of a river. Life in the village was busy. There were people growing food and people teaching the children to make blankets and people cooking meals.

One day as a villager took a break from harvesting, he noticed a baby floating down the river toward the village. She couldn’t believe her eyes! Almost immediately, she heard more crying in the distance. She looked further downstream to see that two babies had already floated by the village. She looked around at the other villagers working nearby.

“Does anyone else see this baby?” she asked.

One villager heard the woman, but continued working.

“Yes!” yelled a man who had been making soup. “Oh, this is terrible!”

A woman who had been building a campfire shouted, “Look, there are even more upstream!” Indeed, there were three more babies coming around the river bend.

“How long have these babies been floating by?” asked a villager. No one knew for sure, but some people thought they might have seen something in the river earlier. They were busy at the time and did not have time to investigate.

They quickly organized themselves to rescue the babies. Watchtowers were built on both sides of the shore and swimmers were coordinated to maintain shifts of rescue teams that maintained 24-hour surveillance of the river. Ziplines with baskets attached were stretched across the river to get even more babies to safety quickly.

The number of babies floating down the river only seemed to increase. The villagers built orphanages. They had their children make more blankets. They increased the amount of food they grew to keep the babies housed, warm and fed. Life in the village carried on.

One day, a villager continued to walk by, despite observing the rescue efforts going on. Those who had been working in the system to rescue the babies called to that villager and asked him to join their ranks. He declined.

One of the rescuers yelled, “Where are you going? There are so many people that need help here.” To which the man replied, “I’m going upstream to find out why so many babies are falling into the river.”

This parable is replete with good lessons. The deeper you dive into the story, the richer the meaning. One of the more obvious lessons is that we can be so busy addressing an immediate need, we never stop to ponder what caused the problem in the first place.

As we started New Hope, I had a sense that we had the inside track on rescuing river babies. We were among the few enlightened, truly upstream ministries.

There was more than a touch of arrogance in that assessment. I imagine that most everyone involved in a ministry to the poor believes that their ministry is “THE” ministry. The reality is that all ministries to the under-resourced are important. We all have unique gifts, passions and experiences that make us better suited for some things than for others. A particular ministry is not better than another: it’s better suited for you. We need them all. It is just as important to rescue babies today as it is to go upstream to stop more babies from being put in the river tomorrow.

One thing that didn’t dawn on me at the time was that many of the ministries that I considered “downstream,” actually also had a significant upstream impact. For example, those who are incarcerated, homeless, or wrestling with addictions often have children. So, in a very real way, these ministries indirectly minister to children in profoundly important ways. By ministering to the parents, you are ministering to the child. The further you go upstream, the more you realize that everything is connected. Everything is important.

Ah…. I get it. We still need to go farther upstream.

Over the last 12 years, we had thought we had finally arrived “upstream” several times, only to discover the issues were deeper, yet still.

So, come, follow me upstream, and let’s find out where all those babies are coming from together.